I confess I’ve never been on a bus tour before – I generally like to use public transport and to decide for myself where to visit.

But as the battlefield sites were spread out, and visiting them would mean hiring a car and navigating my way around a new area, beginning from central Brussels, where I was staying, I decided to let the bus take the strain, and signed up for a tour which was run by Brussels City Tours.

On the day of the tour we all had to meet at the tour group office. There was a large crowd of people waiting, and we were separated into our different tours and escorted to our buses.

My bus – a full size coach – was fairly full, with a mixed group in terms of nationality and age. There were several solo travellers, a few couples and some larger groups.

The first leg of the journey was a drive to Bruges, to pick up some additional guests and our guide for the day.

This is where I began to appreciate being on a tour – although I’d studied World War One history at school, that was several (many!) years ago, and my knowledge was pretty rusty. On our way to the Ypres area, our guide handed out maps and explained the build-up to the war, and some background knowledge of what we could expect to see that day.

Our first stop was to a cemetery for German soldiers, a very peaceful and sombre site.

This photo was taken facing the entrance, and each stone is actually a mass grave, with up to 20 buried beneath. 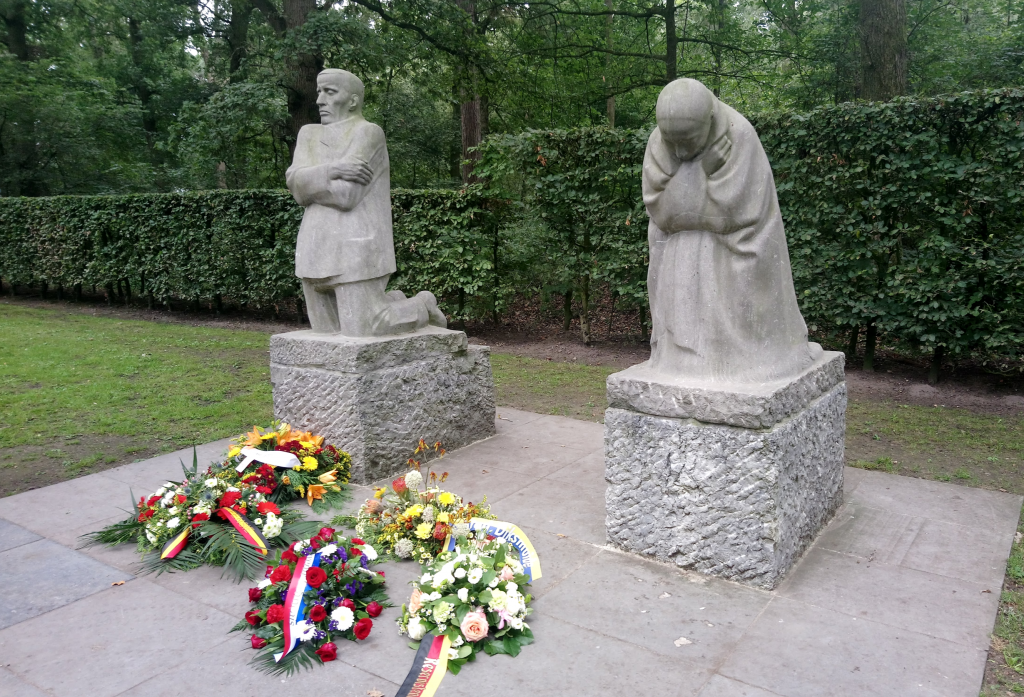 These statues faced the german graves, and are entitled The Grieving Parents, meant to symbolise the tragedy and loss of war.

The artist, Kathe Kollwitz, modelled them on herself and her husband, and they are especially poignant because their son is buried in the first grave in front of the statues.

During WW2 Kollwitz was condemned as a ‘degenerate artist’ because her work did not glorify war.

These would have been tricky to find if I’d been driving, as they are incongruously surrounded by units of a modern industrial estate!

These reconstructed trenches use concrete rather than sand, for durability, and are so narrow that I had to pause and stand sideways when anyone needed to pass me. 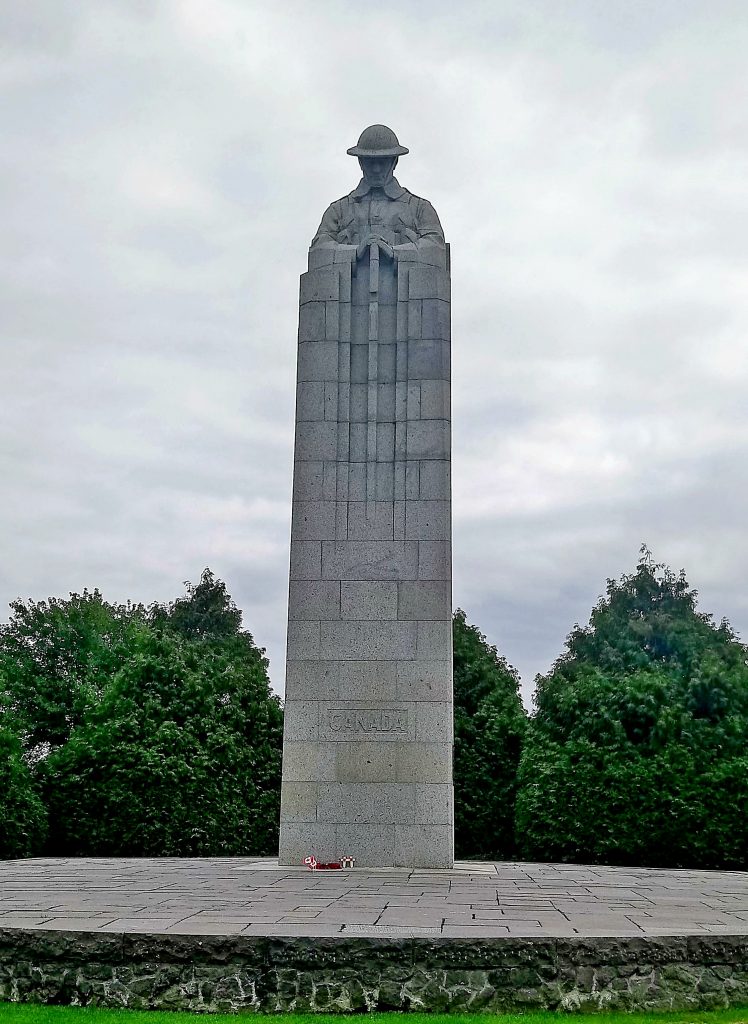 Our next stop was the Saint Julien Memorial, which commemorates the Canadian war dead. It is dominated by a large statue, known as the Brooding Soldier, and surrounded by a garden area planted with trees and shrubs which were imported from Canada.

In common with all the sites we visited there is a Visitors Book here – but not for those who visit to note their own names and comments. It gives a list of those who are known to be buried in each place, with a reference to where you can find the grave – this would be really useful if you were looking for a particular person.

All Allied cemeteries have a Cross of Sacrifice, which varies in size depending on the number buried there. We passed several small cornfields with a Cross within, with just a handful of graves. 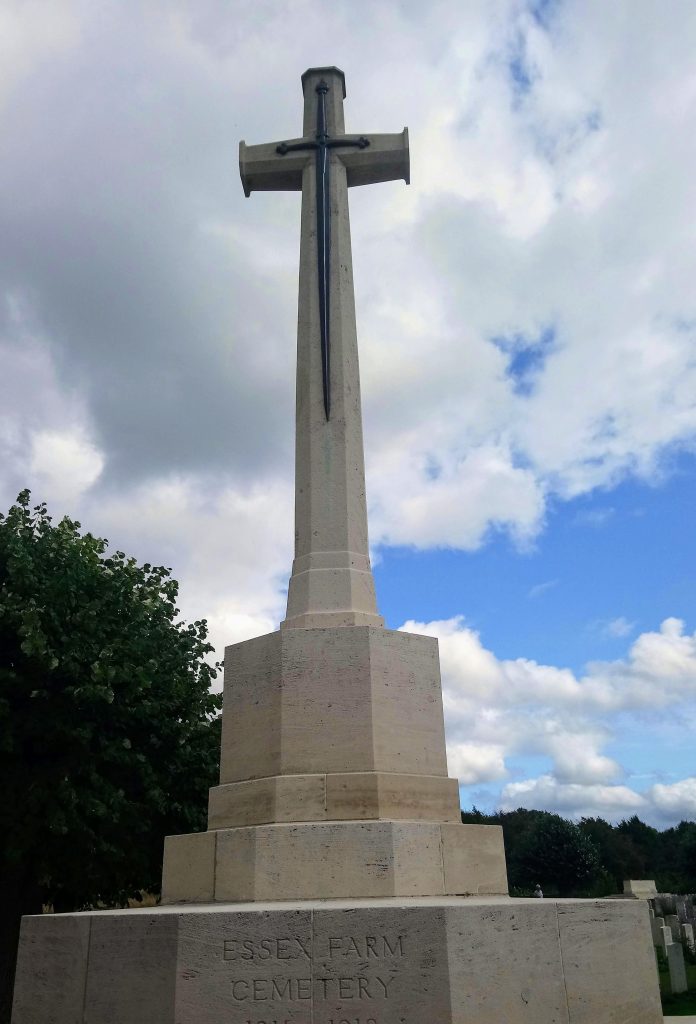 This particular cross was at Essex Farm Cemetery, where John McCrae wrote the poem ‘In Flanders Fields the Poppies Grow‘

Cemeteries with over 1000 graves also have a Stone of Remembrance, which does not vary in size. 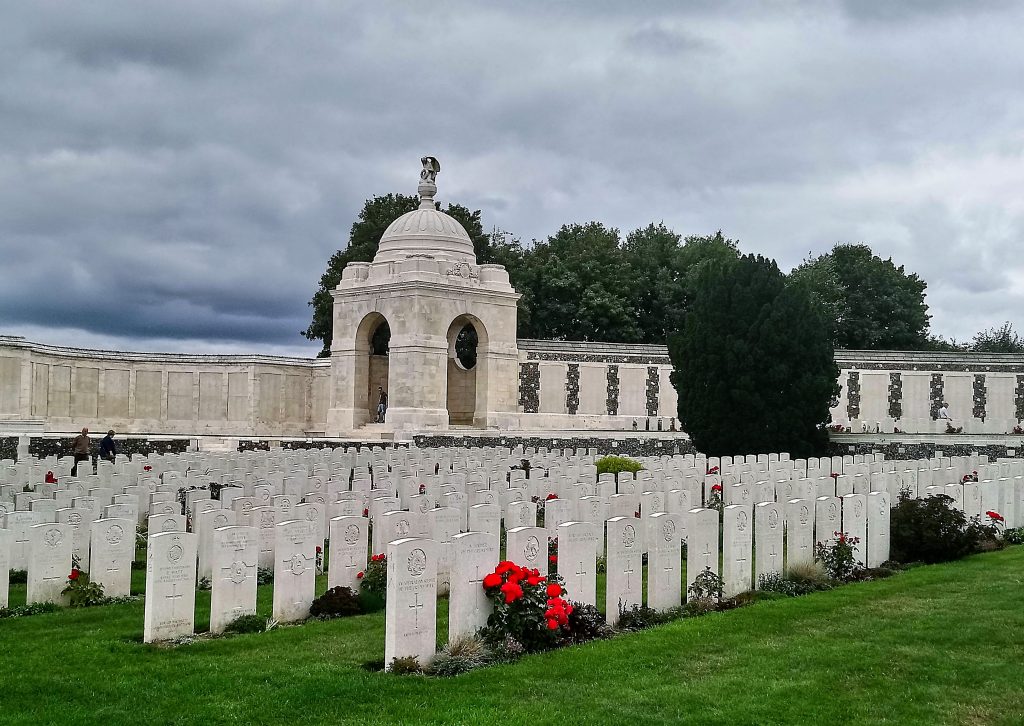 Tyne Cot cemetery holds just under 12,000 graves, of which over 8,000 are unidentified.

There are also 4 German soldiers buried here, who were treated here after the battle of Passchendaele – many of the cemeteries are located on the site of either battles or field hospitals.

The Cross of Sacrifice here is built on top of a German pill box.

Hill 60 was a high point in the geography of this region, even though it isn’t really much of a hill, and was much fought over.

The land was purchased after the war, made safe and left in an unrestored state to re-naturalise, so the ground is uneven, showing where shells would have fallen. 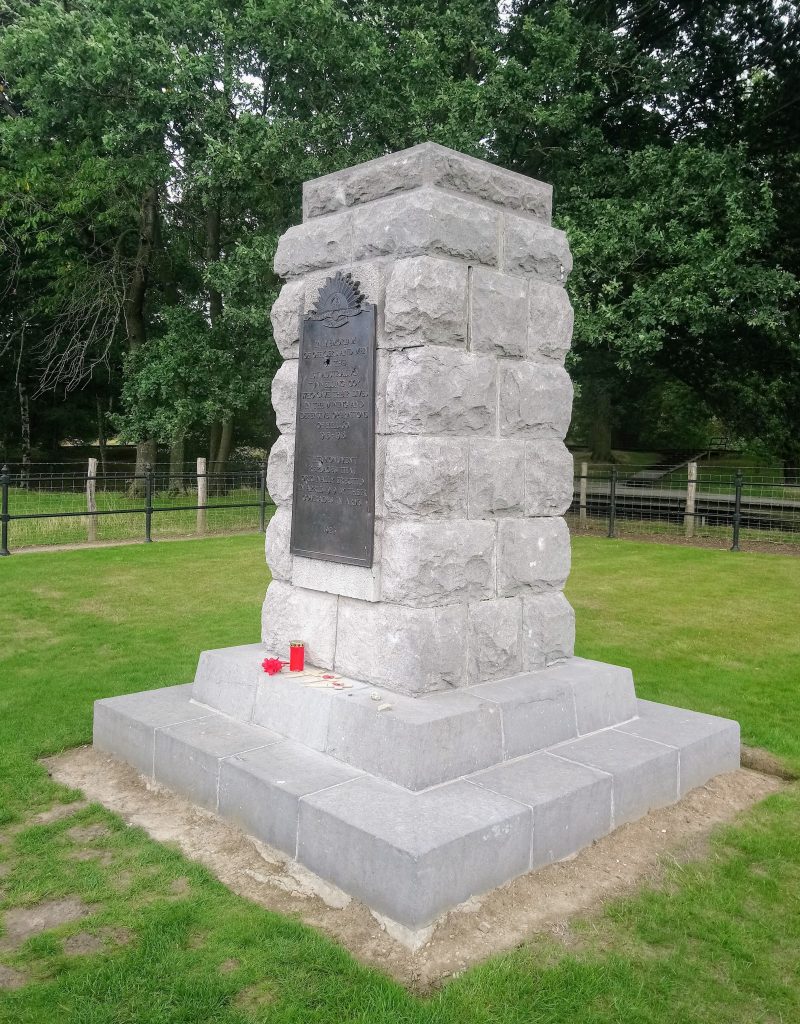 The metal plate of this monument shows a couple of bullet holes, from WW2, when this area was again fought over. Generally both sides avoided WW1 memorials where they could. 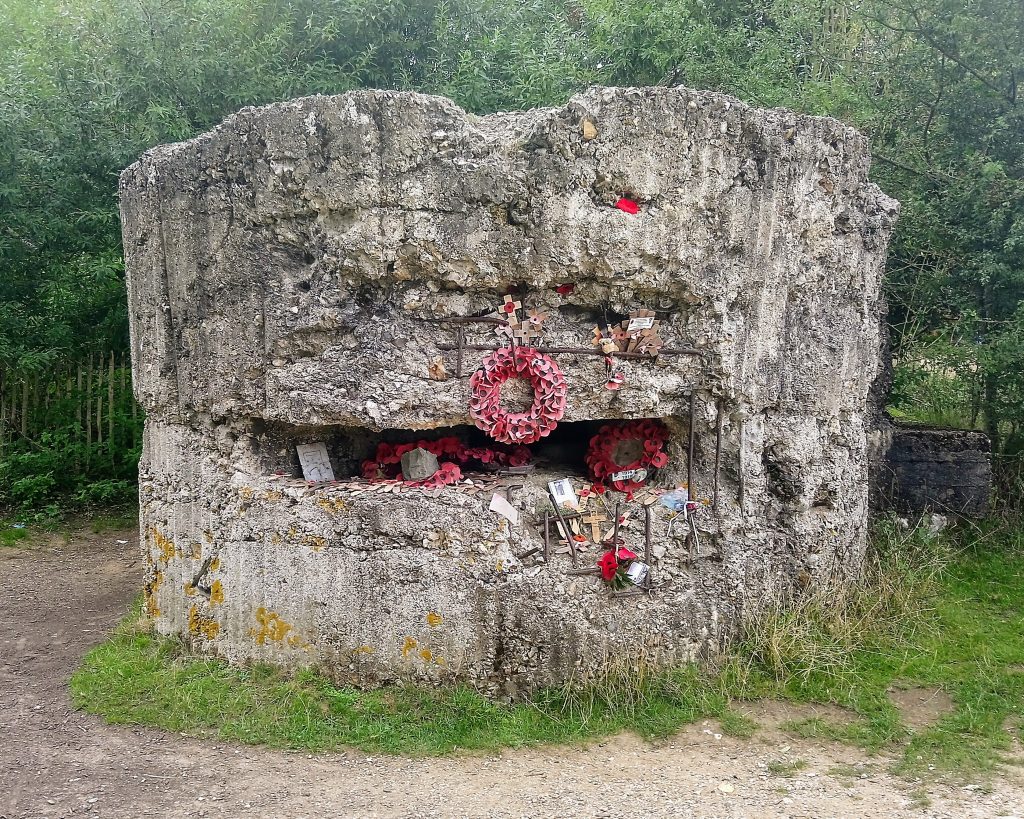 A pillbox which was first German, then when it was captured was built upon and used by the British. 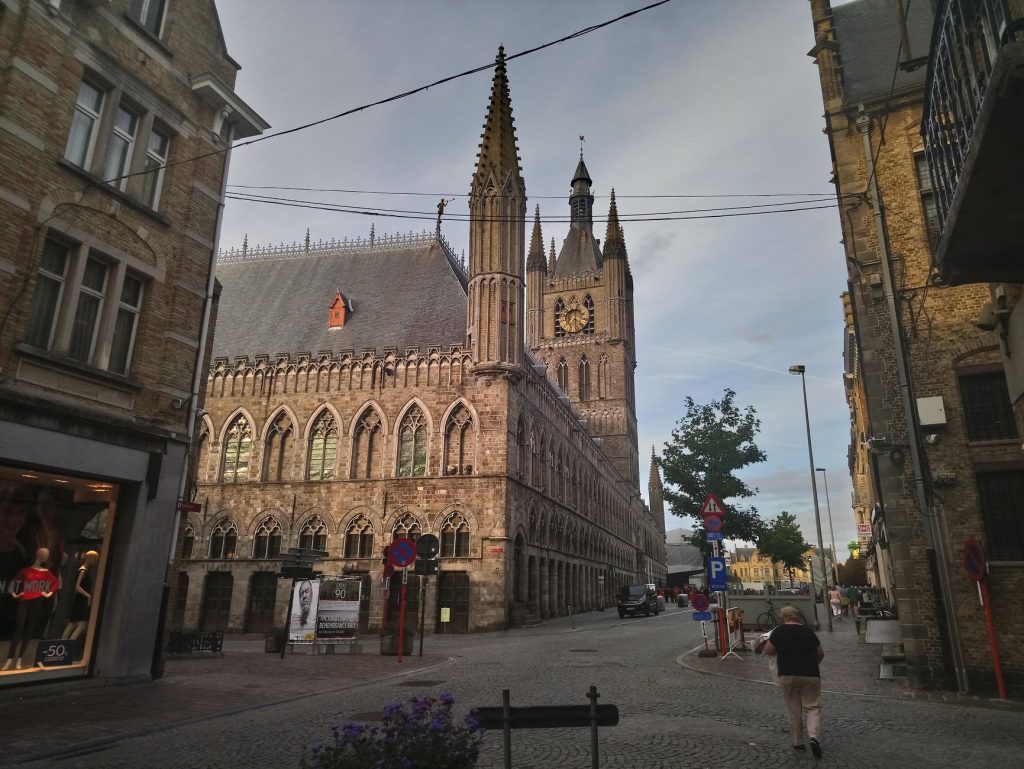 Flanders Fields Museum is located on one floor of this building, Ypres Cloth Hall, which occupies a central point in Ypres.
Ypres was completely destroyed and abandoned during the war. The British (and Winston Churchill in particular) wanted the town to be left devastated as a permanent memorial, but naturally the locals wanted to rebuild.

A compromise was reached with agreement to build the Menin Gate and rebuilding began in 1920. Original stones were used wherever possible, and these can be spotted easily by either damage or by being fire-blackened.

Today Ypres is an attractive town with a population who are remarkably tolerant and welcoming to the visitors who flock there to experience the Last Post Ceremony at the Menin Gate. 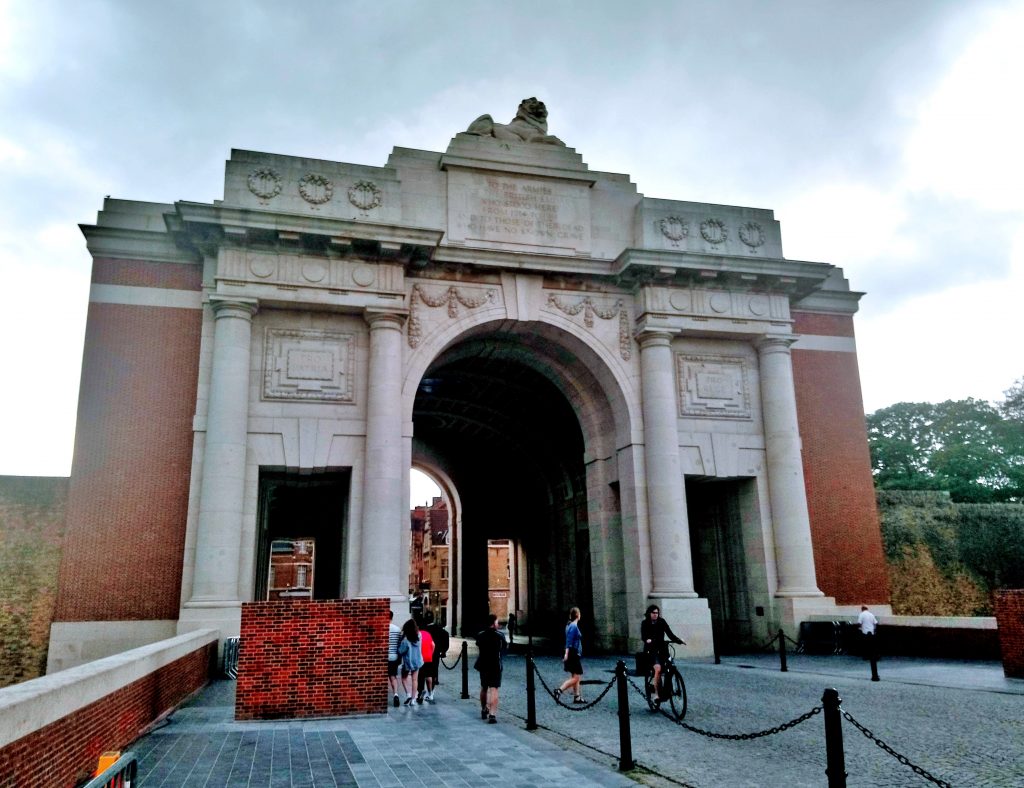 It gets it’s name simply because it’s over the road to Menin, and for most of the day is passed through as a general thoroughfare.  As you can see, it’s quite imposing, and inside is covered with the names of fallen soldiers.

The crowds for the Last Post began gathering before 7.30pm, when we arrived. Traffic is stopped, the interior is roped off into quadrants, and what happens after that varies from night to night, but always includes buglers playing the Last Post.

When I was there, there were also processions from a Polish regiment (the Poles liberated Ypres in WW2), and a Canadian Pipe Band.

Then there were several laying of wreaths, firstly by regimental representatives and then by small groups of families commemorating their own fallen.

So, would I recommend this tour?

It was an excellent way to cover a lot of sites in one day, without the stress of driving and map reading. Our guide was excellent, and explained things clearly and in an interesting manner.  My fellow travellers were really easy to get on with.

It was a very long day, as we didn’t get back to central Brussels until almost 11pm, so it isn’t the kind of trip I’d recommend if you don’t have a fair amount of stamina – there were some children on my tour, and they were exhausted towards the end.

I’ve never tried a bus tour before, and wasn’t sure what to expect, so I was very pleasantly surprised.